Get technical with MathJax

If you need to get technical in your writing, Asciidoctor integrates with MathJax to allow you to write TeX / LaTeX or AsciiMath expressions directly in your document.

With a simple declaration of the stem attribute, you can now write inline and block formulas in plain text too!

You can add even more visual elements to your document with diagrams conjured from plain text. Asciidoctor Diagram emerged from a request to port the PlantUML extension for AsciiDoc Python to Asciidoctor. Pepijn Van Eeckhoudt (@pepijnve) took the reins and created a comprehensive diagram extension that not only adds integration with PlantUML, but three additional diagramming tools, as well as a framework for adding more in the future.

See the Asciidoctor Diagram guide to learn how to create diagrams from ASCII art in your AsciiDoc documents.

Curious how to load extensions like Asciidoctor Diagram from the commandline interface? Read on.

Load extensions from the CLI

Asciidoctor introduced an extensions API in 0.1.4 that enables you to extend the AsciiDoc syntax and tap into the lifecycle of the processor. However, it was only possible to load these extensions when invoking Asciidoctor via the API or by creating a custom launch script.

The asciidoctor command now supports the -r and -I flags (ported from the ruby command) to require additional paths or modify the load path, respectively.

Here’s an example of how to use the -r flag to enable the Asciidoctor Diagram extension:

The -r flag also accepts absolute or relative paths and can be used multiple times.

The scripts referenced by the -r flag are loaded in the order they are listed before any other processing occurs.

Now you get the full power of the asciidoctor command plus extensions!

The DocBook 5 specification was finalized in 2008. It’s time we embrace it.

HTML5 reintroduced flexible HTML syntax that’s only loosely based on SGML…​and most certainly not XML. This decision makes HTML5 more approachable. However, it makes XML parsers .

To accommodate tools that use XML parsers to read the generated HTML, Asciidoctor can now output the XHTML variant of HTML5, known as XHTML5.

To output XHTML5 instead of HTML5, set the backend to xhtml or, to be more explicit, xhtml5. The “x” at the beginning of the name cleverly tells Asciidoctor to close short tags, assign values to boolean attributes and add the xmlns attribute to the root element.

Trust us, your XML parser will thank you.

Asciidoctor can now convert directly from AsciiDoc to PDF and EPUB3, using Asciidoctor PDF and Asciidoctor EPUB3, respectively. These converters are hosted in their own repositories and are distributed as separate gems.

The converters are currently alpha, but still very functional.

Anthonny Quérouil (@anthonny) followed up by developing a Grunt build script to bundle Asciidoctor.js and publish it to npm (the Node.js package manager) and Bower (the web package manager).

The alignment of Asciidoctor.js with Asciidoctor core was a major effort. I want to sincerely thank Guillaume, Anthonny and the Opal team (Adam Beynon, meh and Elia Schito) for making this happen.

The single quote (') and the backtick (`) are two markup characters in the AsciiDoc syntax that often give people trouble. They like to get in each other’s way. We decided to shuffle some of the AsciiDoc syntax to address this problem and, in general, make it more consistent and easy to learn. Not only do these changes reduce slip ups by the parser, they also strengthen the meaning of the plus character and bring more alignment with Markdown by making the backtick the primary character for monospace formatting.

Before introducing what’s changed, we want to emphasize that you can forgo the italic, monospace and passthrough syntax changes by setting the compat-mode attribute, shown here defined in the document header:

or by using a two-line document title:

Compat mode is used to enable legacy syntax when the new syntax deviates from it. See the migration guide for more information about migrating your AsciiDoc documents and the transitional syntax that’s available.

We made AsciiDoc more intuitive and easier to teach by always using + as a passthrough formatting mark. Instead of using the single plus and double plus for monospaced formatting, we’ve made them constrained and unconstrained literals (i.e., “render it as it looks”), respectively. For example:

We haven’t yet mentioned how to format text as monospace. For that, we’ll put the backtick back into play.

Authors who are familiar with Markdown are accustomed to using the backtick (`) to format text as monospace. We’ve embraced this convention in Asciidoctor.

If you want to prevent substitutions in the monospaced text, just remember, “plus for passthrough”:

By not mixing monospace formatting with passthrough (literal) semantics, we are deviating slightly from the behavior of backticks in Markdown. However, that’s because AsciiDoc has additional features, such as attribute references, that we want to be able to leverage when formatting text as monospace.

There will be a period of time during which you’ll have to process your document with both Asciidoctor 0.1.4 and 1.5.0 (mostly while we wait on GitHub to upgrade). We’ve added special logic in the processor to handle a hybrid syntax to use in the interim. Please refer to the migration guide for details.

Legacy AsciiDoc also uses the backtick character for making curved quotes. Because the syntax was so similar to that of monospaced literal text, it often matched in unexpected ways. We’ve made the smart quotes syntax…​smarter.

In Asciidoctor 1.5.0, the backtick acts as a modifier on a quote to indicate it should be curved. You now place the backtick inside the quote character, adjacent to the quoted phrase, to make it “smart”.

This change brings the backtick closer in proximity to the quote and thus makes parsing more deterministic. See the user manual for more curved quote and apostrophe examples.

Single quotes around a phrase are now left alone unless you’re running Asciidoctor in compat mode.

AsciiDoc traditionally supported single quotes as an alternate syntax for marking a phrase as italic. However, single quotes around a phrase already have a very well-defined meaning in Western languages. Making them something they aren’t just isn’t a good idea. We never recommended them for this purpose anyway. Furthermore, they conflict with the new curved quote syntax, so they had to go.

Refer to the migration guide to help ensure a smooth transition to the new syntax.

The leveloffset attribute is used to shift the level of sections when combining documents. It works great for a single include level, but as Groovy developers Cédric and Guillaume discovered, it quickly breaks down when you get into multiple levels of nesting.

Alternatively, you can specify the leveloffset attribute directly on the include directive so you don’t have to worry about restoring the old value.

The Groovy developers use the include and tag directives a lot. They discovered that tag directives within a broader tagged range get carried over into the document. Asciidoctor now drops these lines so you can nest fine-grained ranges within broader ranges.

Serving assets over SSL is a best practice to avoid man-in-the-middle attacks and preying eyes in general.

All remote assets referenced out of the box in Asciidoctor, such as Font Awesome, are now served over SSL from https://cdnjs.cloudflare.com and https://fonts.googleapis.com.

Asciidoctor auto-detects and auto-links URLs. Writers often don’t take advantage of this feature because the link shows the URI scheme prefix (e.g., http://). So, they end up long-handing it for the sole purpose of hiding the prefix.

Now, Asciidoctor can produce the exact same result if you set the hide-uri-scheme attribute on the document.

Rendered URL when hide-url-scheme is set

If you’re linking to an anchor point somewhere else in your document, you can refer to it by title instead of by ID.

You’ll likely want to switch to using IDs as the document matures, but this should certainly help with flow in early drafts!

Leif Gruenwoldt (@leif81) pointed out that the print styles were too aggressive, causing the printed document to lose its integrity. We worked together to tweak the stylesheet until the output looked nearly as good as the PDF generated by the DocBook toolchain. The styles even separate chapters into different pages when using the book doctype. In addition to these styles, we also added the missing table border styles for all the grid and frame permutations on both web and print.

Who needs DocBook when you’ve got HTML5 and CSS3? 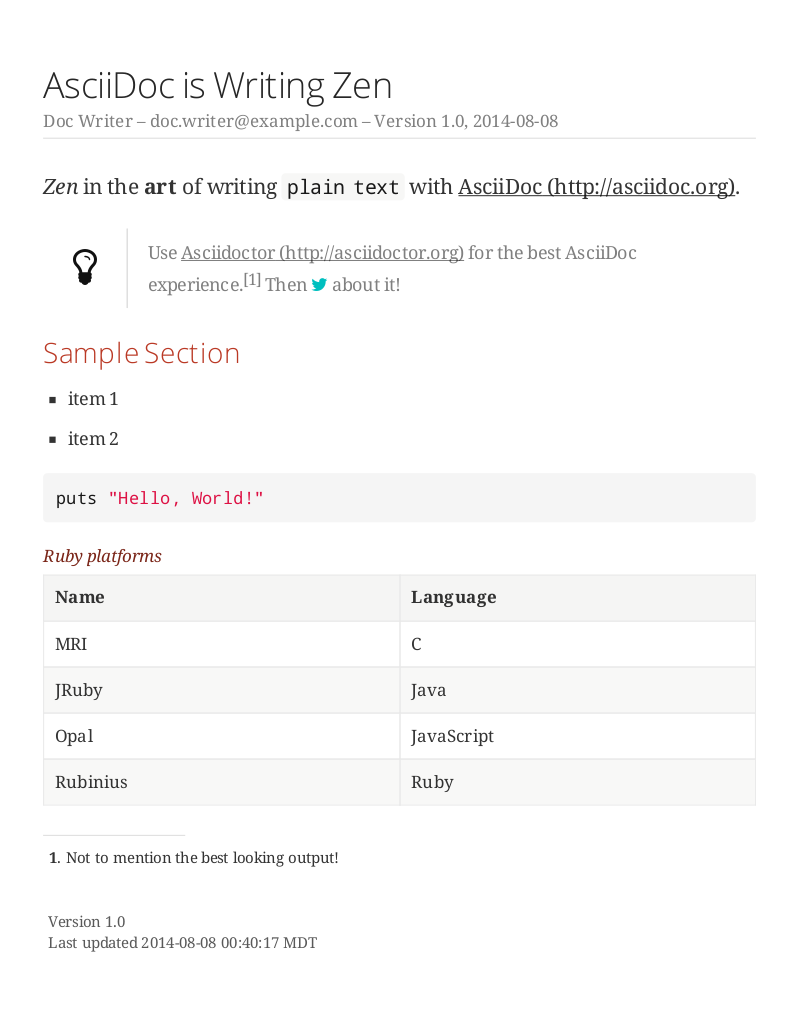 The culture of Asciidoctor is deeply rooted in Open Source, so we want to be Open Source all the way down.

In the past, the default stylesheet relied on Microsoft Core Fonts (Arial and Georgia) installed on the user’s system. We’ve replaced these proprietary fonts with Open Source fonts, which we load from Google Fonts.

Here are the fonts we’ve selected:

We particularly like Noto Serif because it’s an extremely readable font and it supports all the world’s languages.

We made additional refinements to the default stylesheet that give it a professional, modern appearance. Here’s a preview of the new default theme: 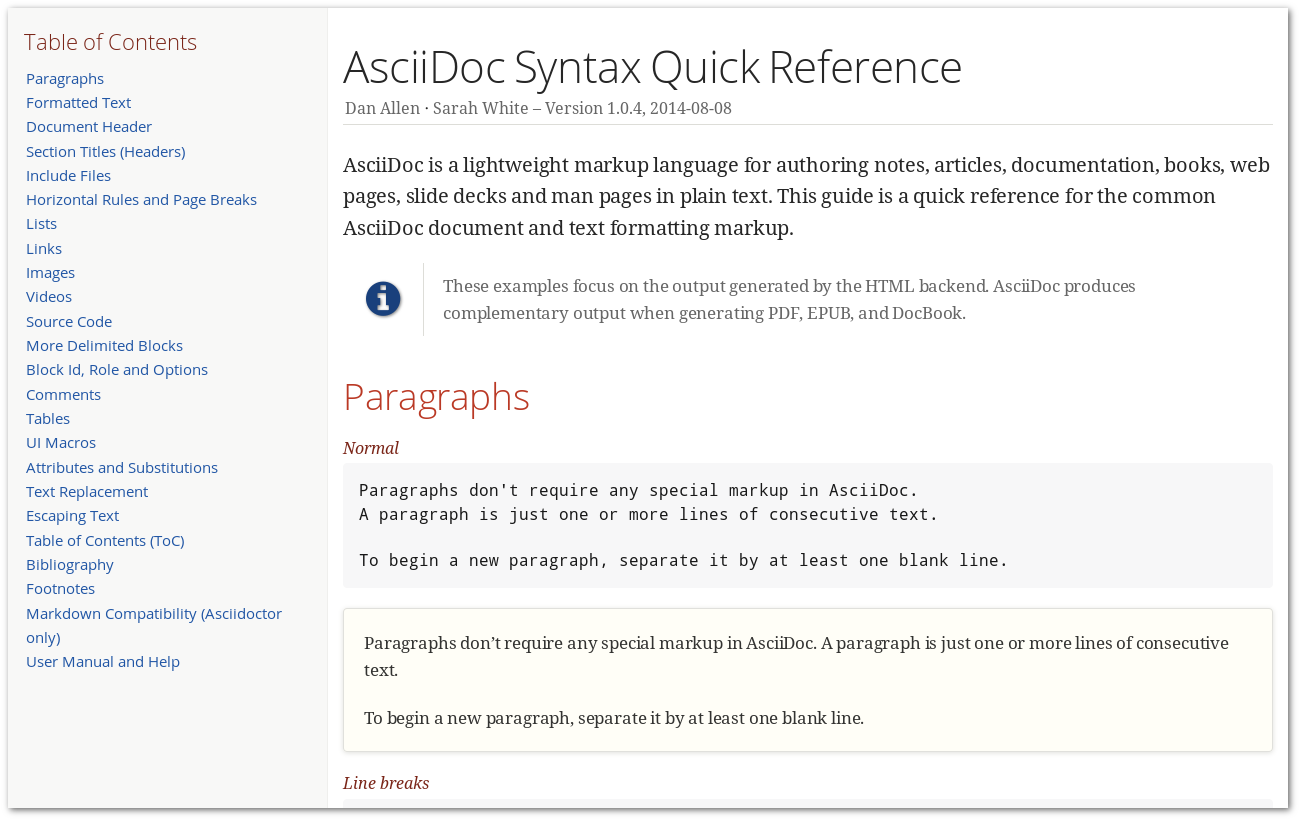 Speaking of fonts, Asciidoctor integrates with Font Awesome 4.1, thanks to the work done by Guillaume Grossetie (@mogztter)! You now have over 400 icons available to accessorize your document!